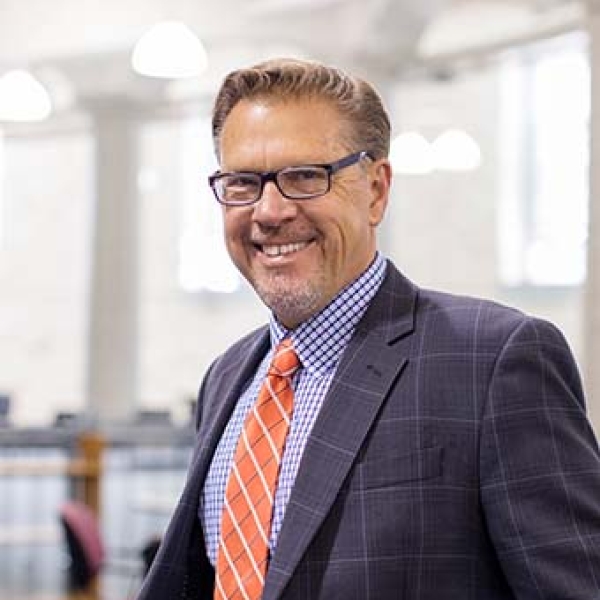 Vice Provost for the Arts

Jody Kielbasa is the Vice Provost for the Arts and Director of the Virginia Film Festival at the University of Virginia. Appointed to the Vice Provost for the Arts position in 2013, Mr. Kielbasa is responsible for planning for the arts in consultation with the Arts Advisory Committee, helping guide fundraising initiatives associated with the arts, including creating the Arts Endowment, and for initiating and coordinating cross-disciplinary collaborations both inside and outside the Visual and Performing Arts & Architecture Departments and Programs at the University.
Expand Full Bio +

Jody Kielbasa is the Vice Provost for the Arts and Director of the Virginia Film Festival at the University of Virginia.

Appointed to the Vice Provost for the Arts position in 2013, Mr. Kielbasa is responsible for planning for the arts in consultation with the Arts Advisory Committee, helping guide fundraising initiatives associated with the arts, including creating the Arts Endowment, and for initiating and coordinating cross-disciplinary collaborations both inside and outside the Visual and Performing Arts & Architecture Departments and Programs at the University.

Numerous programs, including The Fralin Museum of Art, Kluge-Ruhe Aboriginal Art Collection, the Virginia Film Festival, WTJU Radio, and the UVA Arts Box Office report to Kielbasa as the Vice Provost for the Arts. With his oversight, these programs have grown in both staff and programming and continue to provide UVA and the community-at-large incredible opportunities to explore all we have to offer.

As Vice Provost for the Arts, Kielbasa continues to identify new ways to tell the comprehensive story of the Arts at UVA and help its uniquely creative constituencies further their own narratives while showcasing their remarkable work. One way he has facilitated this is through the creation of the UVA Arts Magazine. This glossy biannual piece highlights the creative work, research, and accomplishments of our faculty, students, and alum in the arts.

In 2013, Kielbasa introduced the President's Speakers Series for the Arts, designed to bring in high-profile artists to talk about their careers and the importance of the arts to education and society. The series kicked off with special guest and UVA alum Tina Fey. She spoke before a capacity crowd of more than 6,000 at the UVA Amphitheatre. The series has continued at John Paul Jones Arena with successful and memorable events, including conversations with Tony and Emmy Award-winning actor and writer Bryan Cranston and Tony Award-winning Hamilton star Leslie Odom, Jr.

In 2014, Jody curated the Berlin Wall Symposium, a week-long series of lectures, presentations, and performances built around a section of the wall on loan to the University by the Robert and MeiLi Hefner Foundation, on display outside of the Alderman Library. The Symposium served as the culmination of a year-long effort spanning various schools and departments across the Grounds ending with a special celebration marking the 25th Anniversary of the historic fall of the Berlin Wall on November 9, which featured remarks by Robert Hefner and UVA President Emerita Teresa Sullivan.

In the fall of 2017, Jody oversaw the Bicentennial Launch Celebration, a multi-disciplinary presentation featuring more than 800 performers made up of UVA Arts faculty and student ensembles performing with internationally renowned artists, including Tony Award winner Leslie Odom, Jr., the Martha Graham Dance Company, Andra Day, and the Goo-Goo Dolls. The show, presented in front of UVA's iconic Rotunda before a live audience of over 19,000 people and streamed to over 70,000 alumni, combined live performance with state-of-the-art projection mapping on the Rotunda to tell the story of the University of Virginia from its founding to the current day.

In 2021, Jody launched a projection mapping series entitled Brighter Together, featuring UVA's most iconic buildings, including the Rotunda, the Chapel, the Amphitheater, and Old Cabell Hall, in a stunning display of light and color to offer hope and joy to the UVA community as we emerged from the Pandemic.

Since his 2009 appointment as Director of the Virginia Film Festival (VAFF), Jody has helped guide the VAFF to new heights in attendance earning a place among America’s premiere regional festivals.  The VAFF consistently wins raves from critics and film buffs alike for the depth and breadth of its annual program of over 125 films and for attracting top filmmakers and artists from around the world to Charlottesville.  Over the past several years, the Virginia Film Festival has welcomed an extraordinary array of special guests including Shirley MacLaine, Werner Herzog, Spike Lee, Ashley Judd, Hal Holbrook, Barry Levinson, Danny McBride, Will Forte, Christoph Waltz, and Meg Ryan, to name a few, along with such cultural icons as Rita Dove, Katie Couric, Bob Woodward and Carl Bernstein, Martin Luther King III, Harry Belafonte, Larry Kramer, and the late Julian Bond.  The VAFF has earned and continues to enhance its reputation as a festival that takes audiences far beyond the films on the screen – engaging audiences in vibrant and meaningful dialog about the films and the issues they address.  The reputation is due in large part to the Festival’s unique relationship with the University of Virginia, which allows it to engage experts from the university and beyond to deeply explore a variety of vitally important cultural issues.

Before coming to UVA, Kielbasa spent ten years as the Founding Director of the Sarasota (FL) Film Festival and was instrumental in turning it into one of the nation's premier regional film festivals. Early in his career, he founded the award-winning Tamarind Theater in Los Angeles, California, where he produced over 100 plays.

Born and raised in Fort Lauderdale, Florida, Kielbasa graduated from Rollins College and earned a B.F.A. in Theatre from Florida State University and an M.F.A. in acting from the F.S.U./Asolo Conservatory for Actor's Training in Sarasota, Florida.

Jody Kielbasa resides in Charlottesville with his wife Helen and their three children Camille (College ‘23), Luke, and Juliet.